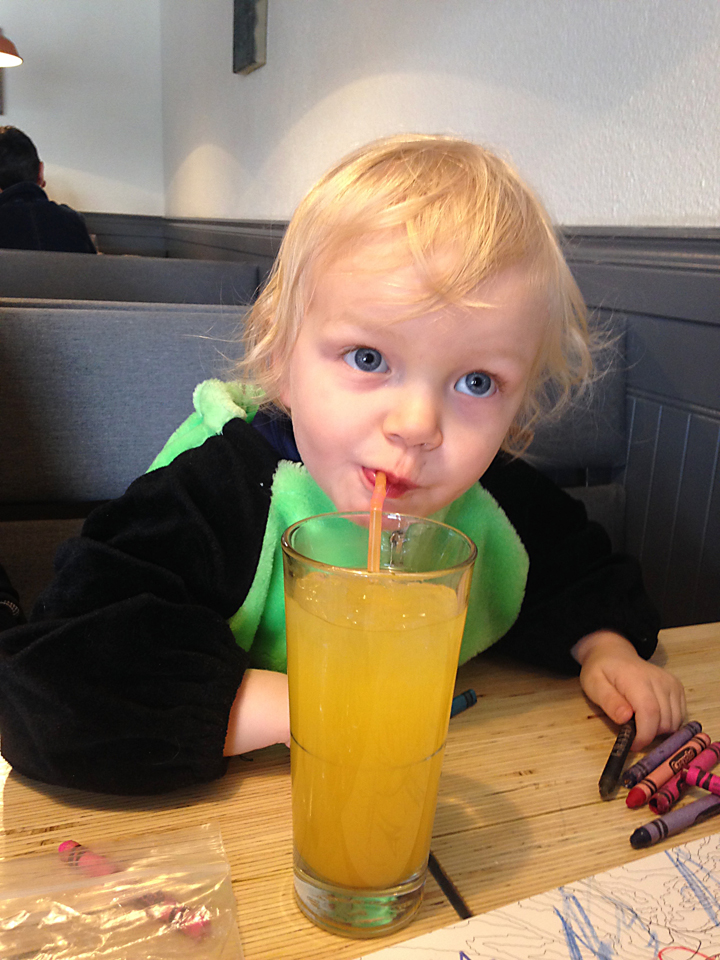 We are forever arguing with Little Hell to eat.

Each meal includes a lecture that is followed by a countdown, a countdown that leads to bed. He hates this. So do we. But all we want is for him to eat. Today, we found some compromise.

I have a running joke that food would taste better if you hid it in the woods and pretended to hunt it.

A broccoli sprig in a tree in the backyard? Sneak up on it and devour it while victoriously screaming. Place some celery in the bushes…then bite it in half and eat its soul! Delicious.

So what I did today was pretend to threaten his food before he ate it. Well, he gobbled it up.

I whispered to it,”Oh, we know what you did. You better run, you spoonful of yogurt. You better run and hide because Little Hell is going to eat your face!”

Then, he devoured the spoonful as I yelled about how the face is the tastiest part of yogurt and grabbed for more. He gobbled that up as well.

Then things got awesome.

He would look down the shaft of the spoonful of yogurt and say very creepily, “Whisper to it Daddy. Whisper to it.”

“I don’t care, at least he is eating,” says Elizabeth, and the box of Pandora was open.

I looked at my boy spawn, then at Elizabeth, and leaped into a vengeance rant, “Yogurt, what you did to my family will never be forgotten. You better pray to whatever God you hold dear because my boy will hunt you down and eat your mind. You can run, but you might as well run into my child’s digestive system because all roads lead to there!”

Then the Bean would slam the spoon into his mouth, take a deep breath, and say aloud, “Again. ”

Since we are talking about eating

When talking about a place that sells food, it is nice not to have to candy coat their food. Otto’s menu is great. From the simple things to the mains, it is very tasty. Thank you, Otto. Thank you for not sucking.

But that is not why I’m writing about Otto.

As a family, it is hard to go and grab food. There are meltdowns and yelling and someone always throws a fork (I can’t help myself), but with Otto, none of this really mattered.

We showed up like a rock and roll band on a bender. Little Hell was dressed like a caterpillar, Elizabeth was wearing a fireperson’s helmet (and she obviously wasn’t a fireperson), and both Miniature Sarlacc and I had recently soiled ourselves, so we were a motley crew.

The wait staff didn’t care. They sat us down. The gave us stuff for the kids to do. They told me I was funny. It was awesome. And the owner, well, here we go…

Ed is a fucking gem. He looked at us, and we had our hands full with Little Hell and offered to take Mini Sarlacc for a couple of full room fly-bys. At first, I was hesitant. I just wanted to eat and get LH across the road to the (AWESOME) playground. But Ed assured me that it was all cool beans. So, he took MS for a spin of the facilities.

I got to eat the most awesome of coleslaw. The delectable sausages. I stole fries from my son and felt nary a bad feeling about it. I had a cider and remembered what it was like to drink in public and not care about anything at all.

It was refreshing that the food wasn’t terrible in any way. It is so nice to not have to embellish this stuff. So very tasty.

It was like I chased it into a swamp, cornered it, and ate a generation of its offspring.  It was like I attacked it and masticated all its future happy memories.

If Little Hell could read, he would be clapping.