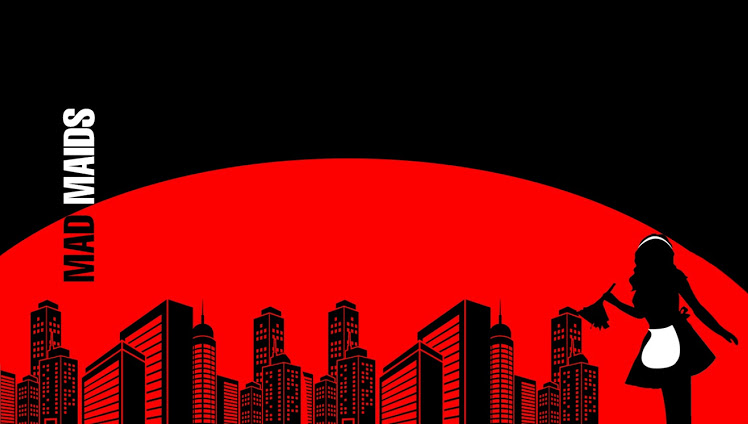 VISUAL/Establishing shot: Scene is set in an elaborate office adorned with a large desk, medieval tapestries, antique muskets and pictures of drawings of stuffed animals. Olympic bronze medal winning figure skater Elizabeth Manley sits behind the desk polishing a bust of herself winking. She notices the camera and drops the bust.

Medium Close Up (MCU) Elizabeth Manley (EM): Oh hi there, my name is Trent Wilkie. Here at The UnDad, we were lucky enough to recently have our lovely abode cleaned by the meticulous folks at Mad Maids. They did a great job. So great that Elizabeth Wilkie attested to it in this collection of words.

VISUAL: Website address flashes on screen. In the background there is a sound effect of a dolphin as an eagle flies through the shot.

EST. SHOT: New camera angle directly behind EM. She swivels around in her chair to face the camera. Behind her, several poorly made pillow forts can be seen. Some are on fire.

MCU EM: If that wasn’t enough, they have given us two prizes to giveaway to our readers. One for the winner with $200 dollars in their services, another for the runner up with $50 in their services. All you have to do to enter is like The UnDad Facebook page or follow @TheUndad on Twitter and answer this question: What is your least favourite part of your house to clean? For me, it is the inside part.

EM then laughs really hard for five to 14 seconds then falls asleep and slides off the chair leaving only a bit of the desk and the pillow forts (some of which are on fire) in the shot. This holds for around 3 seconds and the screen goes dark. Then the screen flashes with this text:

TEXT: As ridiculous as this is, the giveaway is real. The draw for the winners will be held one week from now on Monday, April 18. If you both like on Facebook and follow on Twitter (and answer the skill testing question), your name will be put in the draw twice. Winners will be contacted immediately. You can retweet and repost if you like but it is not mandatory. Also, it is for Edmonton area residents only. Elizabeth Manley’s acting fee was paid for by TLC: The Learning Channel.