Today I had reason to check out Lisa Wheeler’s People Don’t Bite People.

Of course I did, that’s the exciting part of climbing a parenting hurdle. Just when you think you’ve secured the guide wires, everything shifts.

Every night this week I have arrived just as the daycamp counselors are preparing Bean to wait in an administrator’s office. I have arrived, out of breath, with an exhausted, and dirty, toddler in one arm, and my identification clutched tightly in my opposite hand.

On day one I broke Bean’s heart because they had prepared him for the toys he would play with while he waited to be picked up, and my showing up just in time threw a totally not fun wrench into the mix.

On day two Bean queried why he is always the first to be dropped off and the last to be picked up.

On day three, as I raced to the sign out table an incident report sat waiting for me.

My first thought was that I had been written up for always arriving just as after care is ending.

Unfortunately, there had been an incident in the swimming pool. The Bean had coveted a plastic frog already claimed by another camp participant and/or previously stolen from bean. A battle over ownership ensued and Bean staked his claim whilst biting another kid’s face.

Multiple witnesses and the injured party all identified Bean as the face biting culprit.

Bean was beside himself.

He wanted to talk about everything but the face biting.

We had a snack before leaving the YMCA.

What are three things you could have done instead of hurting someone?

What do you have to do tomorrow?

We headed out to the car. Bean held back.

I strapped his sister into his car seat. He continued to keep his distance. I got down on my knees and held my arms wide “hey, little dude you look like you need a hug.” He came running.

I wrapped him in my arms, tightly. “You know, I love you. Making mistakes happens.”

He leaned in. I carried him to the car and strapped him into his seat. I had him phone his dad. We ran home for a few minutes. Moments later he was out. Tired kids are crazy kids. As his head dropped down I understood so much more about this day.

We headed to the public health clinic for immunizations and then dropped by the library. I stumbled upon Lisa Wheeler’s book. I signed it out.

It is funny, to the point, and does a pretty fab job of reminding little ones that “People don’t bite people. No matter what their mood.” 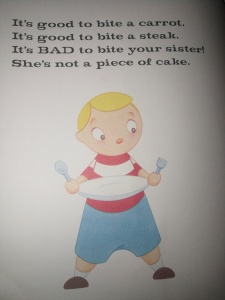 We read the book twice. By the end of the second reading both kids were totally on top of “Biting is for food.”

So, here we are. Two steps forward. One step back.

We have a pretty detailed plan for tomorrow developed. We are committed to:

Bean didn’t think he should have to take a practice run with his sister this evening, but he did.