I wanted to buy some ham for dinner. It’s a reasonable thing. People have bought ham before. People do it all the time. That is why it is sold in grocery stores. That is why pigs were made with an extra flavour gene. Anyhoo, while trying to purchase ham, the cashier told me I was making a mistake.

No, it wasn’t my home made ‘Punch this face’ t-shirt, nor was it my attempt at home dentistry. Rather, it was that I was buying the wrong ham. You see, it was Tuesday after all, I should buy the better ham. The ham that is cooked and delicious-ized in store at the Abbottsfield Save-on (or Safeway, I always get them confused, isn’t that right Elizabeth? (It’s a Sobeys)).1

Let it be known that I was toting the hoser with me. He was all baby giggles and glory. I think this triggered the cashier’s grandma/mother training because not only did she help the shit out of me, she did so with the holy power of a matriarch army. Only problem, the crack ham wouldn’t be read for an hour. So, I went out and stole a helicopter and invented a new form of edible chainmail (I took some cardboard boxes to the recycle station). 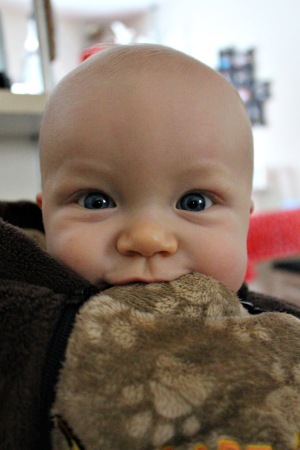 An hour later I’m back and jonesing for some magic pork. I make my way to the meat section, which is right beside the meet section for single grocery shoppers who want to pair up and make it look like they aren’t buying groceries alone (this does not exist), and prepare to purchase my ham. But, as the ladies who work the meat section let me know, the hams won’t be ready for a few more hours as they like to release them closer to dinner. But, BUT, she said, she’ll put one aside, but only, if I bring the smile lord back with me. I said that this would not be a problem as he is actually my twin who is attached to my body (no I did not) and thanked her for her time.

BOOM. Walmart toy section. BOOM. How To Train Your Dragon 2 action figures. BOOM. Talk myself out of impulse buying a whole swack of said action figures. Next thing I know I was wandering around looking at the Iron Man fishing poles and then BEWM, Walmart sell’s machetes (that come with what looks like a throwing knife). Whilst I contemplate the dangers of machetes being sold beside the toy section, I realize it is time to head back to the grocery store. Although the earth child does not agree (he wants the Legos), I can still overpower him as he is only seven months old and we are on our way.

As I get back to the meat section, the wonderful woman of meatville (not her actual name) has brought a friend to say hello to Buddha baby as I pick up my crack ham. Not only were they super kind to put aside some ham-tastic yummers, they were super funny to my kid. They talked to him about their grand daughters who were both five months old and how he should keep them in mind when it came time for marriage.

Jokes aside, it still baffles me how people are affected by smiling babies. It makes me think that babies should be cops, or gods, or hired out to give bad news (Sir, the exorcism of your wife didn’t take, but listen to these crazy fucking giggles!).

Anyway, blessed be those with room in their hearts to show love to strangers and their youthful offspring. Thine kindness shall not go unappreciated. And in celebration of that kindness, I gave both my roll-up-the-rim wins to the drive through lady at Tim Hortons to give free coffees to the two cars behind me. Ronnie Jimmie would be proud.

NEXT WEEK: My wife is taking us to Thailand. And Cambodia. And Ireland. In the most awesomely affordable way possible. Elizabeth Wilkie, your penchant for creative affection is rivalled only by your love of cancer spliffs.

ALSO: If you know of a father who would like to be subjected to my interview type questions and be embraced (digitally) by the UnDad, fire me an email to trent@thetrentwilkie.com. BOOM.